Sometimes I marvel at the ingenuity of the Query Optimizer in generating query plans. In past blog entries (here and here), I’ve thrown some things at it that it handled quite cleverly.

On the other hand, sometimes it does some pretty boneheaded things that don’t seem to make much sense.

Let’s take a look at some examples… from one side of the spectrum to the other.

What goes through the Optimizer’s head when it constructs this query?

Hmmm… I can see right away that the first 4 predicates of the WHERE clause will evaluate to False. And since I know that SalesOrderID is a non-nullable column, it’s impossible for it to be NULL, so the 5th predicate is also False. Since the WHERE clause can never be True, this query will produce no rows. So, heck, why waste my time doing any SCANning or SEEKing of any tables? I don’t have to do anything! I can just sit back and relax.

This is the query plan that it puts together for the above query. It just plops out an empty set:

The following query (Query #2) is exactly like Query #1, except all the predicates are negated so that they will all evaluate to True:

This is the plan that is generated:

The Optimizer’s thinking is:

Hmmm… I can tell ahead of time that the WHERE clause is going to evaluate to True, so I can just throw it out the window… it’s unnecessary. So, it looks like I’ll have to join ALL rows from both tables. Okay, as far as the SalesOrderHeader table is concerned, all I need is the CustomerID and SalesOrderID, and I can just get both of those from the CustomerID nonclustered index and it will be faster to SCAN that than it would be to SCAN the entire clustered index, so I’ll attack that table that way. Similarly, I’ll use the ProductID nonclustered index from the SalesOrderDetail table to pick up the ProductID and SalesOrderID from that table. Then I’ll use a Hash Match to JOIN them together, and finally do a SELECT DISTINCT CustomerID, ProductID.

So it knows the WHERE clause is not needed, and it decides to SCAN the smaller-sized nonclustered indexes to get the data it needs. Brilliant! The Optimizer should be applauded.

What do our judges think of the plans for Query #1 and Query #2?

Now take a look at this query (Query #3). It’s exactly the same as Query #2, only with a different WHERE clause. Again, though, all the predicates evaluate to True… at least you and I can easily see that:

But the Optimizer doesn’t see it that way. Here’s the query plan for that query:

Note the arrows between the operators are a lot thinner than in the previous query, and note that it is doing a SCAN of the SalesOrderDetail clustered index and a SEEK into the SalesOrderHeader table. Here is apparently what’s going on inside the Optimizer’s head as it constructs this plan:

Hmmm… All of the predicates in the WHERE clause refer to columns in the SalesOrderDetail table, which has 121,317 rows. If any of the predicates were referring to a constant value (like WHERE ProductID=777 for example), then I could use statistics to calculate the selectivity of each predicate. But all 5 predicates are comparing columns to some unknown value, so I will assume a selectivity of 10% for each one. Therefore my estimate is that I will choose 121,317 * 10% * 10% * 10% * 10% * 10% = 1.21317 rows from SalesOrderDetail. Since that’s such a small number of rows, I’ll SCAN the clustered index of the SalesOrderDetail table (since I have to get to the columns in the WHERE clause to test each one of them), and then, for each row found, I’ll do a Seek into the Clustered Index of the SalesOrderHeader table to get the CustomerID.

You can see the estimate of 1.21317 rows here in the properties of the Clustered Index Scan: 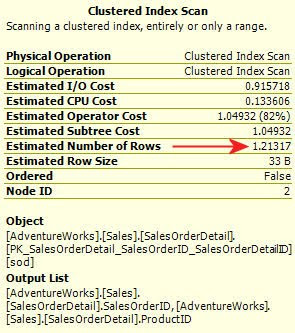 This doesn’t make much sense. Why does the Optimizer think that it’s comparing columns to some unknown value? The only time something isn’t equal to itself is when it has a value of NULL, but all 5 columns referred to in the WHERE clause are non-nullable columns. It’s surprising that the Optimizer can’t see that each predicate is True.

And the plan that it did come up with performs terribly. Look at a comparison in performance between Query #2 and Query #3:

Yikes! Look at the number of Reads! Think about it… in executing Query #3, for each one of the 121,317 rows in SalesOrderDetail, it does a SEEK into SalesOrderHeader. That’s really inefficient.

I don’t think our panel of judges will be thrilled with this, do you? Let’s see what they thought of the Query #3 plan:

Four Curlys! That’s gotta hurt. But you have to admit... It was a boneheaded plan.

Here’s another example in inconsistent approaches by the Optimizer. Look at the following query (Query #4), which uses window functions in OVER clauses in a CTE:

What does the Optimizer think when it constructs the plan for that query?

Hmmm… Looks like there are a few window functions in there, creating columns called Rnum, Rnk, and DRnk. But look! Those columns aren’t referred to in the SELECT list of the main query at all! So heck, I’m not going to waste my time executing those window functions if they aren’t needed. So I’ll put together a plan that simply spits out SalesOrderID and ProductID from the SalesOrderDetail table. And I’ll minimize my time in acquiring those by doing a SCAN of the ProductID nonclustered index instead of SCANning the entire table’s data in the clustered index.

And that’s what it does, as we can see from the following plan:

That’s a very sensible plan. What do the judges say?

Three Emmett Browns, huh?. Sure, he’s a bit quirky, and he’s not as impressive as Einstein or Plato or Galileo or Leonardo or Mozart, but hey, he invented time travel… that’s pretty cool.

Now look at the following query (Query #5), which is exactly like Query #4, except that it uses aggregates in OVER clauses in the CTE rather than window functions:

Wouldn’t you think that the Optimizer would come up with the exact same plan as Query #4? But nooooo… here’s what it’s thinking:

That kind of sounds like my dog when I pull out the bag of dog food every single night. Sure enough, here’s the plan:

Look at all those operators! All those aggregations and sorts and everything, and it’s all a waste of time because none of the calculations are in the final result set.

Look at the comparison in performance between Query #4 and Query #5:

Of course, none of the above queries are necessarily ones you’d actually put together in the real world (though I did stumble upon the behavior of Query #4 and #5 while answering a question in the MSDN T-SQL Forum). And I don’t mean to put down the Optimizer. I guess “bonehead” is kind of a strong word. Perhaps the Optimizer is sometimes just a little bit naïve.

I guess the moral of the story, as always, is to look carefully at your query plans. In the words of another person bordering on genius and naïveté: “Query Plans are like a box of chocolates… You never know what you’re gonna get.”
Posted by Brad Schulz at 4:20 PM