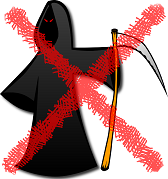 The reports of my death are greatly exaggerated.

Yes, it’s true I haven’t written a blog post since September 13, which is 2 T-SQL Tuesdays ago. It does seem like I’ve disappeared from the face of the earth, but I have a few good excuses.

I had surgery in late September… nothing life-threatening or anything… but it was something that kept me at home convalescing for a good week, and I just didn’t feel like doing anything except watching crap on television. (Well, actually, it wasn't all crap... I had a blast watching the San Francisco Giants win the NL Playoffs and the World Series!)

Anyway, in early October, it was time to go back to work, and even though I wasn’t fully 100% recovered, everything came all at once. I had one client for whom I’ve been doing work for a couple of years, and one of their employees was going on vacation to China for two weeks. He was responsible over the last year for writing code to convert the data from their existing Visual FoxPro database to SQL Server, and the system is set to go live by the first of the year. So everything was starting to come to a head and they were in rush mode. And guess who had to pick up the conversion duties in addition to his own regular duties?

Yep. That would be me. I had no idea what was coming. I ended up putting in 12-hour days for a good two weeks and beyond, even after he came back. And in addition to that, I had two other clients who I was kind of putting off but still gave in and did some development work for them at night from home… not as much as I would like, but, hey, I’m only human.

And now I’ll have to put them off just one week more, because I’m here in Seattle to attend the SQL PASS Summit… my first one. People encouraged me to do a presentation here, but I just wanted to attend and absorb it all with no pressure. That being said, though, I will be hosting a Birds Of A Feather Luncheon table on Tuesday (11:30-1:00) and I will be sitting at one of the Ask The Experts tables on Wednesday (1:00-3:00). Come by and say hi if you’re in the neighborhood.

Flying up to Seattle this morning (Sunday) was an interesting experience. I don’t fly very often at all. When I’ve flown in the past, I usually put my laptop in a small computer bag, bringing only the bare essentials. However, I just bought a new laptop this past summer, and it ended up being just a tad too wide to fit in the bag, so I just kept it in my larger computer bag that I use every day. 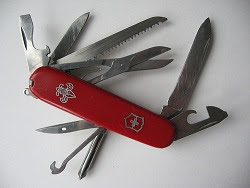 When I went through security at the airport, I took my laptop out of the bag and put it in a separate bin, and then put both items through the scanner, along with a bin containing my shoes, jacket, belt, and pocket items. When I got to the other side of the scanner, they gave me a menacing look, and I was told that they would have to go through my computer bag by hand. Fine… no problem. But there was a problem. In the bag was my Swiss army knife that I bought in Switzerland 23 years ago when my wife and I were on our honeymoon.

So I had to say good-bye to it forever. Theoretically, I could have mailed it home, but that would mean I would have to leave the security area and re-enter and go through security again, and there wasn’t enough time. Oh well…

Still, the flight on Virgin America was very comfortable… it was my first time on that airline, and I was very pleased. And the Light Rail from SeaTac Airport to downtown Seattle was extremely reasonable and very very quiet (completely unlike the 150 decibels on BART trains in the San Francisco Bay Area). And the weather here was very nice and clear and sunny… not the pouring rain that I was expecting. (Ironically, it was raining back home).

So here I am, looking forward to the presentations at PASS, and especially looking forward to connecting with so many people that I know online but have never met. Hopefully, once I recover from this week, I’ll be able to get back in the saddle and post some interesting stuff here once again.
Posted by Brad Schulz at 3:52 PM